What is Brain Awareness Week?

Brain Awareness Week (BAW), an initiative by the Dana Foundation, is the global campaign to increase public awareness of the progress and benefits of brain research. Every March, Brain Awareness Week unites the efforts of partner organizations world-wide in a celebration of the brain for people of all ages.

EBC’s Brain Awareness Week activities fall under the #ILoveMyBrain campaign, which was created by EBC to promote and communicate brain health and ongoing efforts to prevent and treat brain disorders in Europe. The ultimate goal of the campaign is to gain more attention for brain disorders from EU policymakers and the general public. Furthermore, it seeks to ensure that more resources are channeled towards research on the brain and for patients of brain disorders.

During Brain Awareness Week 2021, EBC organised a virtual event, “Patient Engagement in EU-Funded Brain Research Projects”, in partnership with EFNA and GAMIAN-Europe. The event aimed to shed light on the current state of patient engagement in EU-funded brain research projects, exploring how patients have been involved to date, their experiences in this involvement, the challenges continued to be faced, examples of patient-involved projects and initiatives and looking at what can be done to improve engagement. 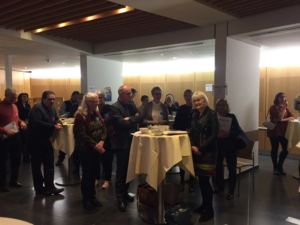 During Brain Awareness Week 2019, EBC organized an awareness event on the topic “Mood and Food: Exploring the gut-brain connection”, for policymakers and the general public. The event took place within the European Parliament in Brussels (Belgium) and was organized in partnership with the Federation of European Neuroscience Societies (FENS) and the European Dana Alliance for the Brain (EDAB). The main focus of the event was the connection between mood and food, exploring the relationship between what you eat and how it can affect your mood and daily function. 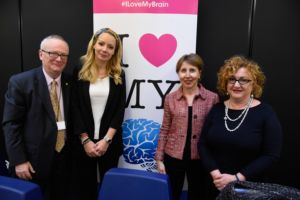 The 2018 edition of Brain Awareness Week took place in the European Parliament in Strasbourg (France), where an awareness event under the theme “Expanding Brain Research in Europe: Education, Behaviour and Brain Development” was organized for policymakers and the general public.  The event was coordinated in partnership with the Federation of European Neuroscience Societies (FENS), the European Dana Alliance for the Brain, the Belgian Brain Council, the University of Strasbourg-Neuropole and the Bureau Grand Est. 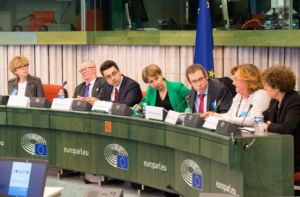 The first event took place on 14th March 2017 in Brussels (Belgium) in the form of a lunch debate, and brought together an audience of civil servants, European and International Organization’s officials, patient representatives, health professionals, clinicians, researchers, scientists as well as other stakeholders from the health and research community. Supported by Janssen and in partnership with members the Federation of European Neuroscience Societies (FENS), the European College of Neuropsychopharmacology (ECNP) and GAMIAN-Europe, the event was designed to start a conversation and work in alignment with the EU institutions relevant to health and research, and brought together speakers representing the European Commission, Neurology, Neuroscience and patients.

The second event was subsequently hosted by Ms Anne Sander MEP and Mr Momchil Nekov MEP on 16th March 2017 at the European Parliament in Strasbourg (France), during the plenary session. EBC organized this outreach event in collaboration with the Dana Foundation, the Belgian Brain Council, the European Psychiatric Association (EPA) and FENS. The title of the event “Expanding Brain Research in Europe: A societal Need?” was in parallel to the Lunch debate.