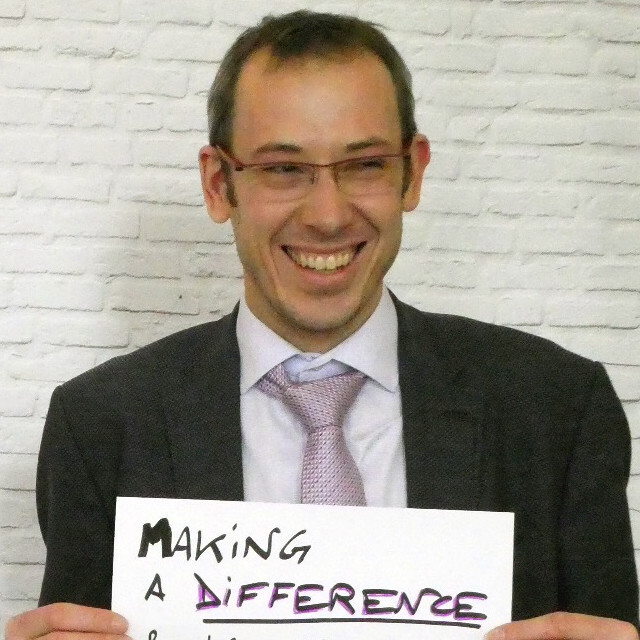 Frédéric Destrebecq is the Executive Director of the European Brain Council since October 2014. In this capacity, he is responsible for providing strategic direction and leadership while managing the day to day operations of EBC and its ongoing relationships with its member associations and other stakeholders, as well as representing the organisation in various European and national forums.

Fred holds a Master Degree in Political Science and International Relations from the Université Catholique de Louvain (Belgium). He also studied at the Institut d’Etudes Politiques (Paris) and University of Wales College (Cardiff), in the framework of the former EU Socrates exchange programme. Prior to EBC, Fred served the European Union of Medical Specialists (UEMS) as Chief Executive Officer, and previously as Director for European Affairs.

Latifah Irakiza is the Office Manager at the European Brain Council as of May 2018. Latifah organized and coordinated administration duties within the EBC team, and helps maintain an efficient work environment, ensuring high levels of organizational effectiveness, communication within EBC, and safety.

Prior to this position, Latifah has worked at luxury hotels in Brussels for the past 10 years.

Anissa Bajja is the Finance & Administrative Manager at the European Brain Council since June 2022. She is responsible for the overall financial management, budgeting, accounting as well as the supervision and management of human resources processes.

She has a degree in Accounting and Tax and a Master’s in Business Administration. Prior to this position, Anissa worked as Financial Controller for SDA AISBL and as Finance project consultant for USG Finance Professionals.

ASSISTANT TO THE DIRECTOR

Monika Hoang joined the EBC Team in August 2022 as Personal Assistant to Executive Director, Frédéric Destrebecq. Alongside agenda setting and coordination, she also provides support to the Brussels Office when needed. Additionally, she is involved in the set up of the European Brain Foundation and the administration of the Belgian Brain Council.

Monika was born in Poland to Vietnamese parents and is set to graduate with a Multilingual Master’s in Linguistics and Literary Studies from Vrije Universiteit Brussel. Her passions are diversity, children’s and women’s rights and education. Prior to EBC, she has gained experience in fields such as recruitment, employer branding or product marketing.

Rik Bollaert joined the EBC team in April 2020 as Partnership Project Manager. Rik supports the team in the search for long-term corporate partners and for financial support of EBC generated research projects and events.

After having worked in major convention centers in France (Strasbourg and Lille), he has over the last 10 years developed extensive experience and knowledge in business development and stakeholder relationship management for international not-for-profit associations. Rik speaks four languages (English, French, Dutch and German) and holds an MBA from Manchester Business School.

Stephanie Kramer joined EBC in March 2016 and leads the Communications, Advocacy & Policy team. Her work revolves around effectively communicating all EBC work to the general public, EU institutions and policymakers and all other relevant stakeholders; shaping the communications of EBC’s advocacy work, policy reports, research projects and EU projects; managing the advocacy and policy monitoring within the health and research space – particularly involving the brain; as well as planning EBC’s external events.

Stephanie holds an LLM in International Law from the University of Edinburgh, and a BA in International Relations & Diplomacy. She has previous communications, external relations and project management experience from internships at the United Nations and private sector organisations. She was a member of the 3rd European Health Parliament and the ThinkYoung Vaccine Coalition. Stephanie has lived and worked in 12 countries around the world, including the United States, the Netherlands, Thailand and Chile.

Annette Dumas provides policy and advocacy support to EBC. Annette’s current work inter alia covers the Rethinking Alzheiemer’s project, the ‘Value Of Treatment’ projects and the monitoring of EU initiatives such as the European Commission’s ‘Healthier Together’ initiative.

Prior to joining EBC, Annette has worked in the private sector (MSD – Merck Sharp & Dohme) in France and in Belgium.  Since 2004, she has been an independant consultant in EU affairs. She has provided support to a number of NGOs (Alzheimer Europe, EURORDIS, the European Migraine & Headache Alliance, the European Multiple Scleroris Platform and the European Institute of Women’s Health) as well as Ace Alzheimer Center Barcelona, Spain.

Annette has provided voluntary support to a number of national Alzheimer associations. She is currently a volunteer for La Voix Des Migraineux, the French migraine association.

In 2009, Annette received DOD’s ‘Consultant of the Year’ Award.

Dominika Suchonova joined the European Brain Council (EBC) in March 2020. Her responsibilities include drafting communication products such as website and social media content, assisting in outreach with external stakeholders and supporting the organization of advocacy and awareness raising events as well as congress preparation.

Dominika has international experience in the field of communications, marketing and event management that she acquired in France and Denmark. She worked both in the non-profit (AFS Intercultural Programs) and the public sector (French School of Public Health, French Ministry of the Armed Forces). She holds a bachelor degree in the French philology from the Masaryk University (the Czech Republic) and a master degree in Intercultural Communication from the University of Rennes 2 (France).

Elke De Witte is the Projects Team leader at EBC. In her role she is primarily responsible for the delivery of current European projects, such as EBRA, PRIME and Brainteaser.

Elke has a background in clinical research and holds a PhD in Neurolinguistics. Her research focuses on language mapping and cognitive assessments in awake brain surgery. Prior to her position at EBC, Elke worked in San Francisco for three years, first as a Postdoc researcher at the Biomagnetic lab/Neurosurgery department of UCSF Medical Center and later as General Manager U.S. for LynxCare, a medical technology company automating the extraction of outcome data from medical records using Natural Language Processing.

Kristien is Project Manager at the European Brain Council (EBC) since September 2019. In this position, she is primarily responsible for the delivery of European projects, such as EBRA.

Kristien has a PhD in Psychology from Ghent University (Belgium) where she worked 4.5 years. Her research focused on cognition-emotion interactions in the brain. Prior to this position, she was involved in a short project on the early diagnosis of Alzheimer’s Disease at the European Health Management Association (EHMA). Before, she lived 6 years in Lyon (France) where she worked at the Lyon Neuroscience Research Center (CRNL, Lyon, France). Here, she conducted research and was responsible for the management of the ERC project “Brain&Mindfulness”.

Graduated in 1991 in Political Science International orientation, during her studies she had the opportunity to deepen her knowledge of Community Law, Direct and Indirect EU Financing  at the University of Strasbourg, France. From 1995 till now Carla is carrying out consultancy activities within the framework of non-repayable funding programmes (Community Programmes, Structural Funds) – dealing with grant preparation and project management of EU funded projects as well as training on grant writing. In this capacity, she supports EBC since 2003 in the preparation of grant proposals and in the management of funded project as Senior Project Manager.

Vinciane Quoidbach is Research Project Manager – Public Health and Policy for the Value of Treatment for Brain Disorders Study at the European Brain Council.

Vinciane holds a Master Degree in Hospital and Healthcare Management from Solvay Brussels School of Economics and Management and a Postgraduate Diploma in Public Health Management from Manchester Business School. She also holds a Master Degree in Political Sciences and European Studies from University of Antwerp. Prior to this position, Vinciane worked in both public and private sector, at national and international level. She served the Belgian Federal Public Service Health, and the Federal Minister of Health Cabinet as Advisor in charge of public health policy and regulations development in the area of Cancer, Chronic Diseases and Rare Diseases as well as the Biopharmaceutical Company AbbVie as Health Initiatives Manager. She also worked for the World Health Organization  in Geneva, Swizterland as Technical Officer, Non communicable diseases and mental health cluster and the United Nations Development Programme in Pretoria, South Africa as Technical Officer, Social development department).

Vinciane is also a staff member at the Belgian Centre for Evidence-Based Medicine (CEBAM) at KULeuven.