Alzheimer’s disease (AD) is a major unmet medical need that requires innovation to be aligned with public health needs. It represents between 60% and 70% of the dementia cases. It is still diagnosed too late when the symptoms become evident as the disease progresses.

AD is now portrayed as continuum consisting of 3 stages: an asymptomatic preclinical phase, a mild cognitive impairment (MCI) phase and dementia.  To match this continuum, current research is focussing on the early stages of the disease (MCI stage) when it is believed that a therapeutic intervention would slow or prevent disease progression.

The European Brain Council (EBC) is leading the ‘RETHINKING Alzheimer’s disease project’, in collaboration with the European Federation of Pharmaceutical Industries and Associations (EFPIA).  The project aims at identifying the roadblocks to early detection and diagnosis of AD and will propose a new clinical pathway building bridges between all stakeholders to improve the current situation. This is what the Symposium speakers discussed with the audience during the 32nd Alzheimer Europe Conference which took place from 17-19 October 2022 in Bucharest (Romania) and online.

Read more about the symposium

Kevin Quaid (Ireland), diagnosed with Body Lewy dementia in 2017 at the age of 57, gave a poignant testimony of how receiving a diagnosis changed his life. After ignoring a number of red flags and a lot of doctor-hopping, Kevin feels very lucky that a neurologist did all the investigations necessary to give a diagnosis that enabled him to start the journey with the disease.

Kevin stressed the importance of health professionals using the right words. He made a comparison with cancer: patients are told what type of cancer they have, the stage of the disease and a care plan is put in place. People with dementia do not get the same level of precision: they have dementia, they are touched by dementia, their condition is the result of ageing. The disclosure of a diagnosis can be traumatic moment: Kevin did not hear Body Lewy, only the word dementia that he associated with AD. 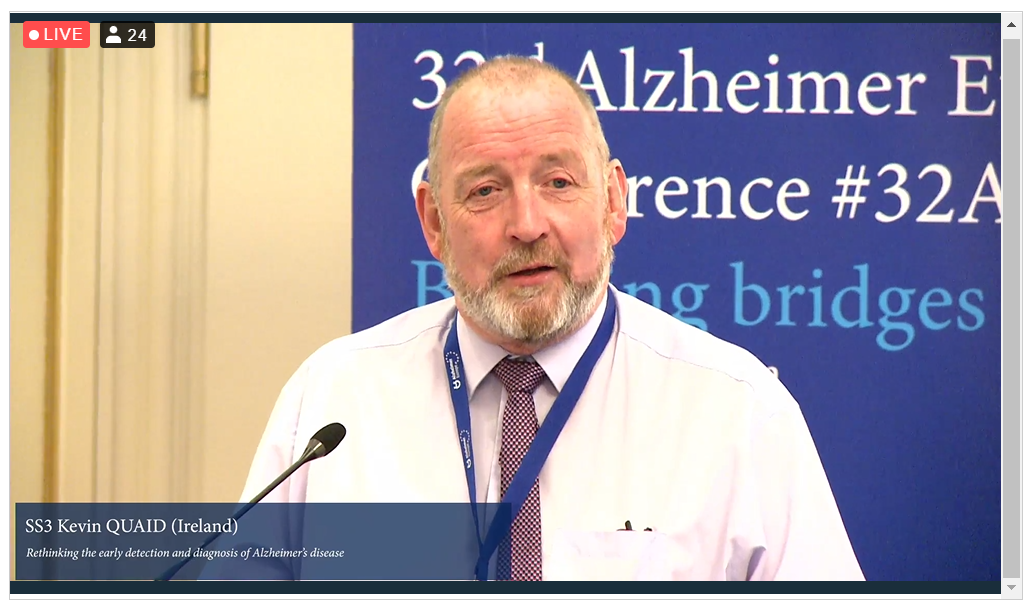 There are different types of dementia that are treated differently and getting a proper diagnosis leads to proper treatment, thus avoiding overmedication and drug misuse. Kevin illustrated this saying that the diagnosis allowed him to reduce the 19 different medications he was taking to 4.

“The difference a diagnosis makes should not be overlooked. A proper diagnosis leads to proper treatment and adaptation to a new life.”

“My life did not end after diagnosis. On the contrary, I embarked in a new life and realised I still could do many things, like writing two books, speaking in schools or conferences.”

“Never give-up, look for your inner strength and do not let a diagnosis get at you. My activism seems to be influencing my disease progression positively.” 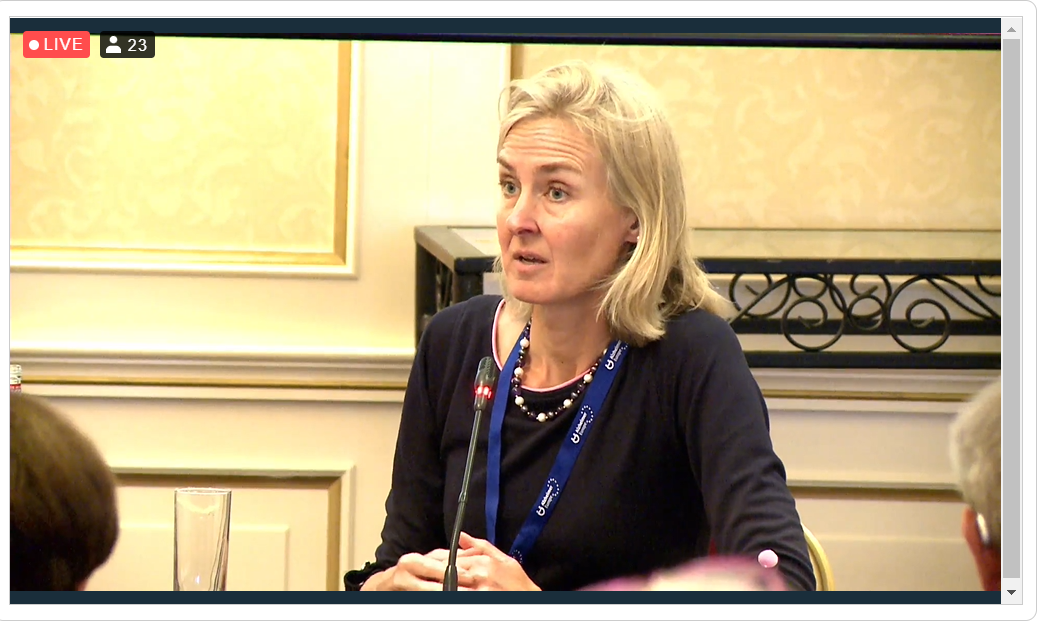 Wiesje then referred to the AD continuum: the disease starts long before the symptoms appear and some 17 million people are likely to have MCI. In the pre-clinical stage, over 300 million show an Alzheimer brain pathology. As biomarkers are used to determine the type of dementia, there is a large scope for intervention to stop the disease from becoming full-blown dementia. The GPs should be able to carry out tests and funnel the patients to a memory clinic where the opportunity to carry out confirmatory tests will be decided. Blood-based biomarkers can serve as a pre-screener at GP level and can be combined with digital cognitive tests. They are easy to deploy and generate more reassurance.

The disease modifying treatments (DMTs) that are currently developed will target the huge number of people with mild dementia and MCI. A molecular diagnosis will then be relevant in the short term to identify people at risk. Some studies will need to be carried out though to determine if lifestyle interventions and if DMTs will bend the disease curve.

It will be important to raise awareness among primary care practitioners about the factors that influence brain health, the different types of dementia and understand how the brain functions. ‘Checking-up from the neck up’ needs to be included in clinical practice. For the other types of dementia that are not recognised, the memory clinics have the facilities for such diagnosis.

Lenka Krajčovičová, Neurologist, (Czech Republic) followed-up on Kevin’s testimony and recommended to go to a neurologist to avoid a doctor-hopping experience before getting a proper diagnosis.

Currently, the available biomarkers (PET, CSF) are not always used because of various reasons: they are costly, invasive and not available everywhere. Lenka agreed with Wiesje that blood-based biomarkers will help make a diagnosis. They are cheap and simple tests that could be delivered at GP level, on equal footing as other tests like PSA.

Lenka sees general practitioners (GPs) as having a key role in the identification of at-risk patients: they have a good knowledge of their patients’ comorbidities that can put them at risk of developing AD (like age, diabetes for instance).  The GPs can propose their patients to be tested and then referred to a memory clinic for confirmatory diagnosis if needed. 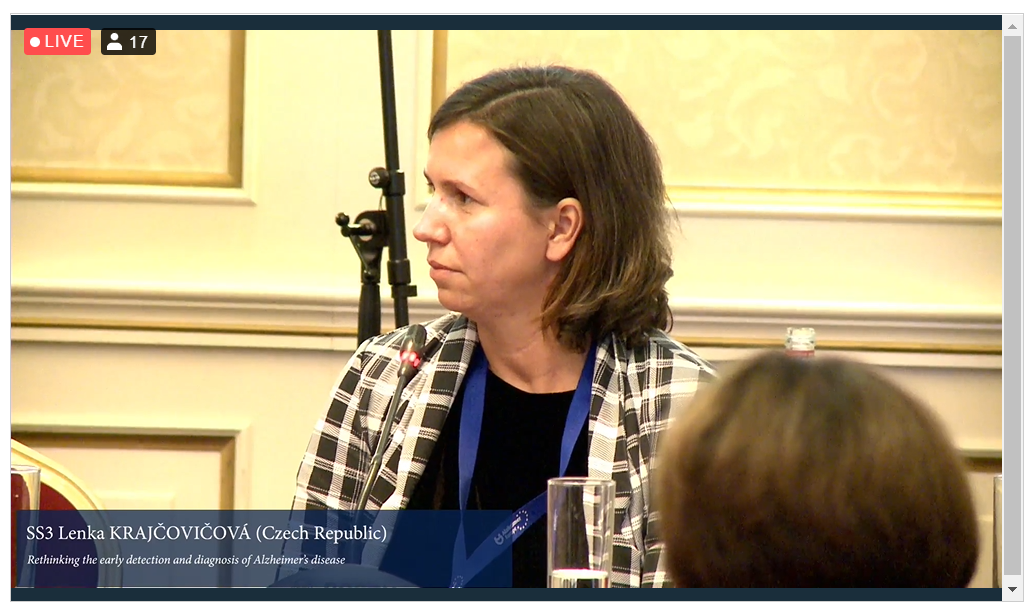 “All need to be involved to improve detection and find solutions.”

“Let’s build bridges together to better detect and diagnose AD in the future.”

“Researchers and clinicians are wonderful. They need clear support and patients are there to inspire them.”

The event was moderated by Lydia Lanman (Roche) on behalf of EFPIA’s Alzheimer’s Disease Platform (Roche, Eisai, Eli Lilly, Novo Nordisk and Biogen). The discussion with the audience raised the importance of involving the family in the diagnosis. Family’s and patient’s history must be put in parallel with the tests. Families are well-placed to identify red flags.

Regarding blood-based biomarkers, it was specified that they will give information about neurodegeneration in the brain. The diagnosis will be made by a specialist. They could be used routinely to see if something goes wrong in the brain.

The Symposium ended with a lot of optimism: all the progress that has been made cannot be taken for granted and the current research developments look promising. It is crucial to build on the major achievements that are being made in the detection and diagnosis of AD and continue research to end-up with solutions. This calls for finding a new detection and diagnosis pathway building bridges between all stakeholders (patients, health professionals, researchers and policy makers to ensure the healthcare system is read to uptake the new developments). The time is ripe.