Event report | Best practices for patient safety: An EU-wide view on the use of medicines off-label

On 30 November, the GOLUP consortium held a virtual event, led by the European Brain Council, to build on the latest discussions on the Declaration on Good Off-Label Use Practices.

The event was hosted by MEP Cyrus Engerer (S&D, Malta), who is a member of the European Parliament Committee on the Environment, Public Health and Food Safety (ENVI). . The conversation involved all stakeholders involved in the dissemination of the declaration – including policymakers, clinicians, and patient representatives – who are all impacted by the declaration and whose involvement is critical in order to better understand their needs and tailor dissemination strategies effectively.

The roundtable was opened by an intervention from Frédéric Destrebecq, Executive Director of the European Brain Council, who presented the potential role of the GOLUP Declaration in promoting a common European approach for off-label use and the four criteria that form the basis of the declaration.

A keynote address was given by MEP Engerer, who recalled the themes of his Thought Leader piece recently published in Parliament Magazine. He emphasized the dangerous approach of some authorities that, by using drugs off label, are looking for an economic return above the safety of patients. For these reasons, a unified approach at European level is the only way to allow an adequate level of safety for all European citizens.

“EU patients should receive the same access to safe and effective treatments, irrespective of where in the Union they live.” 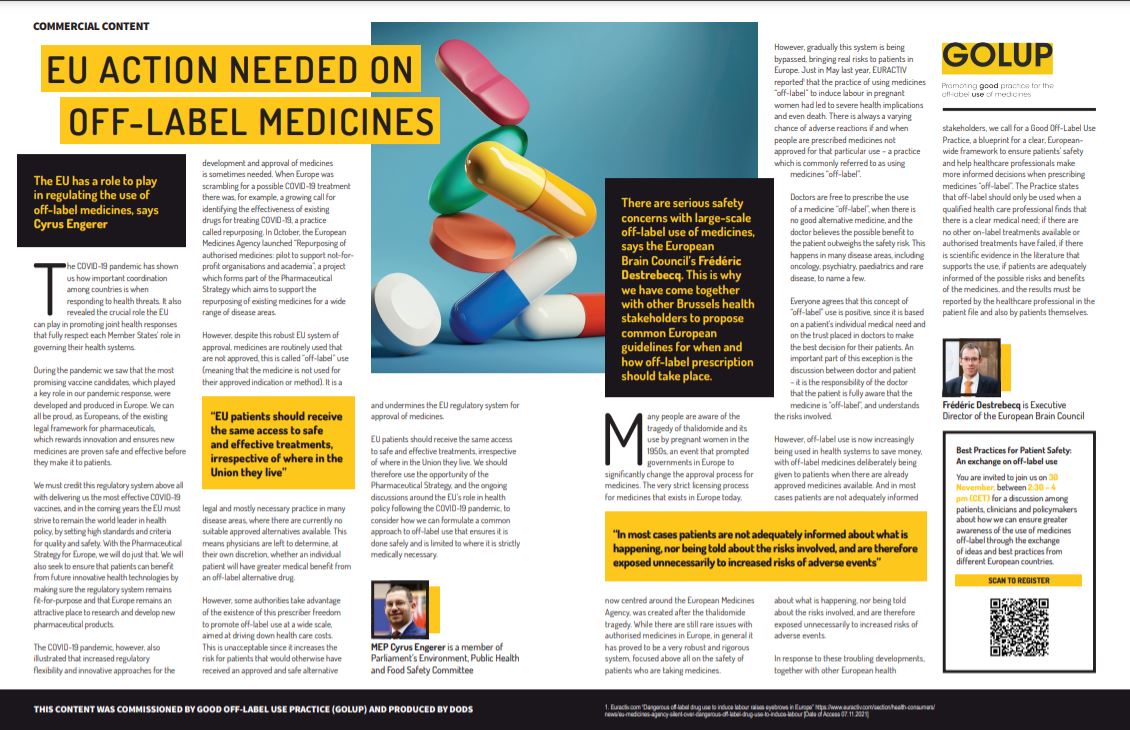 Aude L’hirondel, Legal Officer at the European Commission Directorate-General for Health and Food Safety, and Cesar Garcia Hernandez, Head of Department of Medicines for Human Use at the Spanish Agency for Medicine and Health Products, held a joint presentation. The first part focused on the main conclusions of the study on off-label use of the Commission, while the second part examined concrete issues at the national level on off-label use, providing the experience in Spain.

“There is an urgent need to explore possibilities for action at national level on off-label prescription and reimbursement measures.”
Cesar Garcia Hernandez

The voice of the patients was conveyed by Pedro Carrascal, President of the European Multiple Sclerosis Platform, and Adela Maghear, EU Affairs Office at the European Cancer Patient Coalition. Mr. Carrascal presented the MS Barometer, a benchmarking tool to provide an accurate picture of MS management across Europe, opening to the possibility to include off-label use in the next reports. He also underlined the disparity of off-label use management amongst hospitals, which leads to unequal treatment for patients. Ms. Maghear explained how the high number of cancer types makes the off-label use of medicines a relevant issue for this medical area.

“The off-label use in oncology has been estimated to reach about 15% and in pediatrics this practice is particularly widespread.”
Adela Maghear

Dr Carla Tortorella, Neurologist at the San Camillo Hospital in Rome, gave an overview of the normative framework for the off-label use in Italy, explaining that in some cases, free access to pharmaceutical treatment is allowed before the Italian Medicines Agency (AIFA) authorises it, or, for medicines already authorised, for indications other than those for which the product has been authorised. This modality is under the responsibility of the prescribing physician and the choice of the most appropriate treatment depends on the specific indications.

The interaction between the speakers and with the audience led to a rich discussion that will be taken into account for the next actions of the consortium to disseminate the Declaration. If you want to stay updated with the next steps and upcoming events, you can subscribe to the GOLUP newsletter by visiting the official webpage: braincouncil.eu/golup.