Psychedelic-assisted therapies in the treatment of brain disorders 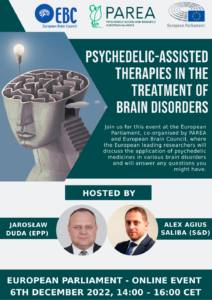 The Psychedelic Access and Research European Alliance and European Brain Council are pleased to invite you to attend the upcoming event, “Psychedelic-assisted therapies in the treatment of brain disorders”, hosted by MEPs Jarosław Duda (EPP, PL) and Alex Agius Saliba (S&D, MT) in the European Parliament on 6 December 2022 at 14:00 –16:00 CET.

Understanding our brain is an enormous task and brain research is extremely complex. Despite huge scientific efforts, mental, neurological and substance use disorders are leading the list of diseases without a known cure. Estimates show that – at the current pace – by 2040 e can prevent only a small proportion of a burden from neurological and mental health conditions: 23% and 14% respectively.

However, innovations that completely change the lives of patients continue to emerge and psychedelic-assisted therapies are one such area. Rapidly growing, rigorous, and compelling body of research demonstrates that these therapies can be a potent new class of treatments for mental, neurological and substance use disorders.

In 2021 alone – ground-breaking findings were published in prestigious journals such as Lancet, Nature Medicine, and New England Journal of Medicine. For example, a phase 3 clinical trial demonstrated that 67% of participants who received the MDMA-assisted therapy no longer had PTSD after two months of therapy. A double-blinded randomized study published in August 2022 in JAMA Psychiatry found that – with 2 doses of psilocybin paired with psychotherapy – nearly half of participants had stopped drinking entirely by the end of the 8-month trial. Psychedelics are also increasingly being researched in the context of neurological disorders such as headaches.

While no treatment is without risks, research shows that psychedelic-assisted therapy is generally physiologically and psychologically safe when delivered in controlled and supportive settings and psychedelic compounds are non-toxic and non-habit forming.

The President Biden Administration’s letter from May 2022 anticipates that US regulators will approve MDMA and psilocybin within the next two years for treatments of PTSD and depression. The administration is “exploring the prospect of establishing a Federal Task Force to monitor and address the numerous complex issues associated with these substances”. In the next few years, millions of Europeans may be eligible for a prescription of psychedelic therapies and we need to start preparing for this now.

Join us in the European Parliament, where the European leading researchers will discuss the application of psychedelic medicines in various brain disorders and answer any questions you might have.

Agenda
Register To Attend in Person*

*Space is limited and not guaranteed.