Patient safety and informed consent: The importance of good off-label use practices 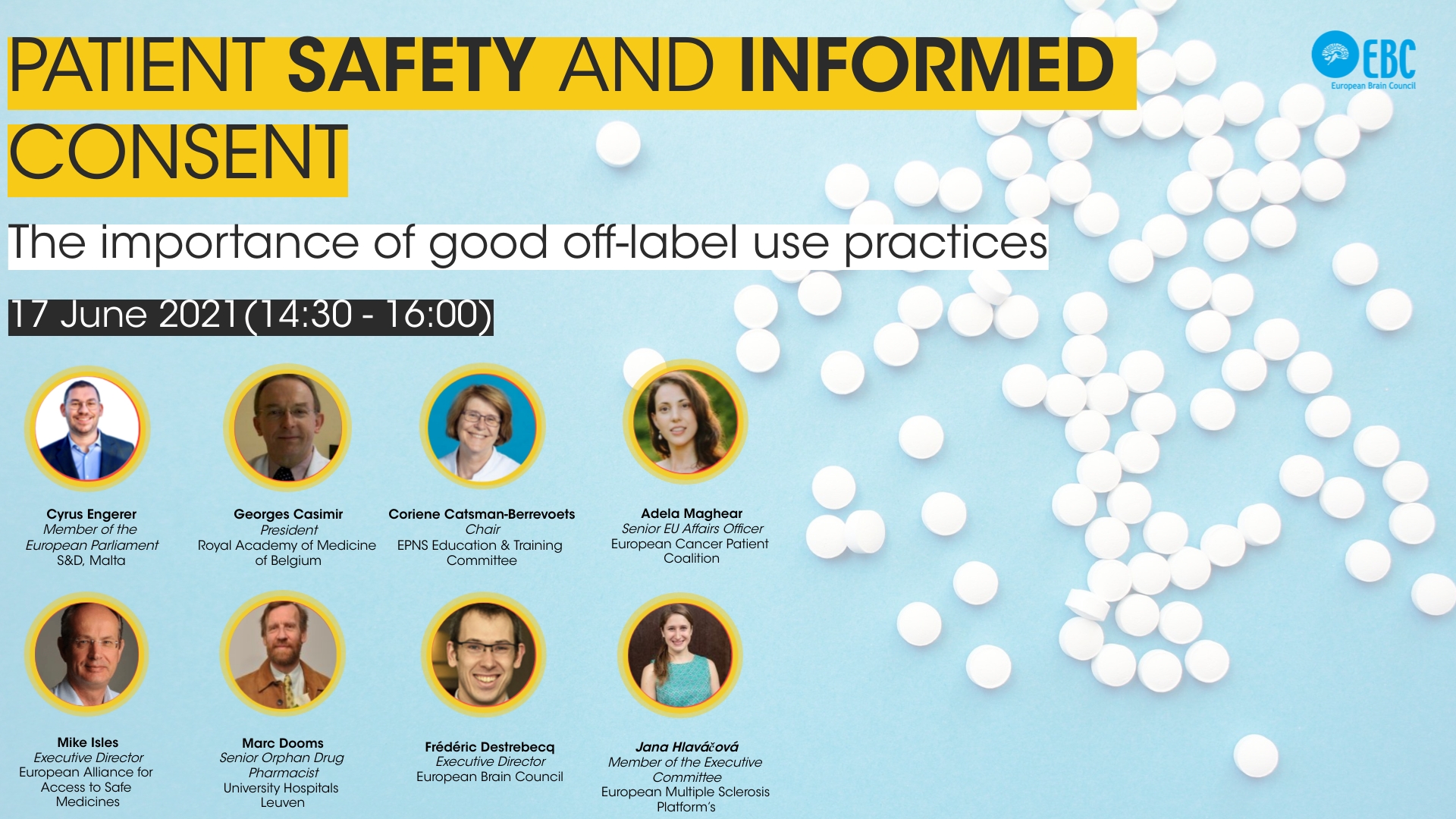 In 2016, the Declaration for Good Off-Label Use Practice was launched, supported by a coalition of European organisations dedicated to ensuring that high standards of patient care are upheld and that progress in medical research and innovation is achieved. The GOLUP Declaration recommends that off-label use of medicinal products should only occur if certain criteria, drawn together by independent experts, are met.

Five years later, the time has come to take a step forward, to look back at what has been achieved and to prepare for future developments. It becomes necessary not only to take an EU-wide view of the use of off-label medicines but also to take action at the national level.

Other notable successes in the last 6 months include becoming the lead negotiator for the Socialists and Democrats regarding the historic declaration of the EU as an LGBTI Freedom Zone following his appointment to the Committee on Civil Liberties and became one of the
most vocal MEPs on healthcare issues relating to the Covid-19 Pandemic following his appointment to the Committee on Environment and Health. He has also been appointed as the shadow rapporteur for the Socialists and Democrats on the ENVI Opinion concerning the protection of workers from asbestos.

Cyrus is a leading activist for Civil Liberties in Malta. He was the spokesperson for the Stand UP! Campaign which led to the introduction of divorce in Malta and he chaired LGBTIQ Labour. After 2013, the Government appointed Engerer as the first Chairperson of the LGBTIQ
Consultative Committee which was tasked with the introduction of a number of equality laws in Malta.

He is 39 years old and is the partner of Randolph De Battista.

She has a wide interest in paediatric neurological topics but acquired brain injury and its neurocognitive sequelae,  be it through mechanisms as traumatic brain injury, immune-mediated diseases, paediatric stroke or brain tumour has always been her main topic of research.  On these topics, she published more than 200 papers.

She served in the board of the Dutch Society of Paediatric Neurology from 1995 and from 2004-2010 as President. She was board member of the Posterior Fossa Society from  2014 and Chair of this Society from 2016-2018.  She has been an elected board member of the European Paediatric Neurology Society 2004 and Chair of the EPNS Education and Training Committee since 2014. Since 2014 she is Chair of the Committee of National advisors to EPNS and the Training Advisory Board. In this role, she took the lead in the revision of the European training syllabus for paediatric neurologists and evaluated national training programmes in Spain and Georgia. Also, she was responsible for the organization of multiple EPNS international training events in Budapest, Alicante,  Cambridge, Tblisi, Astana and Tashkent. More recently during the COVID pandemics, she was responsible for organizing several virtual  EPNS training courses and monthly webinars. She was member of the organizing Committee of the International Child Neurology Congress in Amsterdam in 2016, She is member of the advisory boards of the Dutch Neurofibromatosis Society and the Society of patients with Sturge Weber Syndrome and member of various Dutch multidisciplinary professional networks that support organizations of patients with Acquired Brain Injury.

Marc Dooms
University Hospitals Leuven
Mr. Dooms (Pharm D) is Senior Orphan Drug Pharmacist at the University Hospitals Leuven. He is compounding/dispensing pharmacist in First in Men Randomized Clinical Trials. He has been a member of the Belgian Order of Pharmaceutical Sciences and the Flemish Society of Hospital Pharmacists (VZA) since 1975 and the Belgian representative to the European Union of Experts in Rare Diseases with frequent collaboration with Orphanet, the European Society of Clinical Pharmacy, and the American Society of Health Care Pharmacists, among others, since 2000.

Mr. Dooms is founding member of the Belgian National Board on Orphan Drugs within the King Baudouin Foundation and is a graduate-level teacher in dermatological compounding, drug adherence, and orphan drugs, since 2010. He is also teaching pharmaceutical technicians at Leuven Syntra School. He has co-authored a number of publications on orphan drugs.

Frédéric Destrebecq
European Brain Council
Frédéric Destrebecq is the Executive Director of the European Brain Council since October 2014. In this capacity, he is responsible for providing strategic direction and leadership while managing the day to day operations of EBC and its ongoing relationships with its member associations and other stakeholders, as well as representing the organisation in various European and national forums.

Prior to this position, Fred served the European Union of Medical Specialists (UEMS) as Chief Executive Officer, and previously as Director for European Affairs. Fred holds a Master Degree in Political Science and International Relations from the Université Catholique de Louvain (Belgium). He also studied at the Institut d’Etudes Politiques (Paris) and University of Wales College (Cardiff), in the framework of the former EU Socrates exchange programme.

Adela Maghear
European Cancer Patient Coalition
Adela is a graduate in pharmacy studies and holds two PhD degrees; one in Medical Sciences (Field of Pharmacy) and another in Chemistry awarded by the University of Medicine and Pharmacy Cluj-Napoca (Romania) and University of Lorraine (France), respectively.

With a strong focus on environmental safety, her research work and scientific publications have dealt with a wide range of subjects. In 2015, she changed career paths when she received the Robert Schuman scholarship at the European Parliament Research Service in Brussels. Her career within the field of health policies continued as she became a member of the European Health Parliament, Antimicrobial Resistance Committee, that same year.

In 2016, she ushered her skills and expertise in the fields of health and environment to ‘Health Care Without Harm Europe’ where she spearheaded the organisation’s policy work related to pharmaceuticals in the environment and antimicrobial resistance. She developed and led the Safer Pharma Campaign, aimed to ensure legislation in place, in order to minimise pharmaceutical pollution as the end goal.

Her work has been cited in international journals such as The Telegraph, ChemicalWatch UK, Pharmaceutical Technology, Market Business News etc. In 2019, she worked as an independent Science Advisor leading projects on antimicrobial resistance.

In 2020, she has joined ECPC as Senior EU Affairs Officer leading the policy work of the organisation and coordinating the activities of the Challenge Cancer Parliamentary Intergroup.

Jana Hlavacova is herself MS patient for almost 10 years, all this time she has been active as patient advocate in the Czech Republic and on the European level as well thanks to European Multiple Sclerosis Platform (EMSP). Since 2015 she has been a member of EMSP’s young people’s network, now she serves as a member of the Executive Committee.

She was also active in the Czech Civic Association SMS – an association of and for young people with MS in the Czech Republic, which she led between 2014 and 2016.