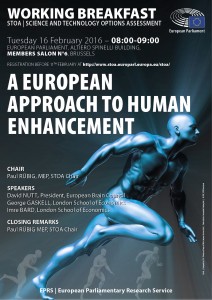 Imre Bard, London School of Economics, walked participants through a number of relevant reports such as neuro-enhancement (NE), including a STOA report from 2009. One of the main conclusions stemming from these reports is that the normative framework is missing. This has been one of the key goals that NERRI project – an EU funded project looking at “Neuro-enhancement; Responsible Research and Innovation” has been trying to achieve. He then went on describing project outcomes resulting from a number of mutual learning exercises that project partners conducted with various target groups such as patients, military, students, industry, doctors and researchers.

In general, three main approaches towards NE prevailed: the minority would say that it is wrong, while majority was split between: i) those in favour of status quo – individual achievements should be most important, NE should be applied only in the context of restoration, social cohesion should be taken into account; ii) the most open group seeing NE as an expression of how technology can serve human potential.

In general, there was a consensus among these groups regarding issues such as a preference towards using NE for treatment rather than enhancing healthy individuals, regulating the filed as well as protecting minors.

The findings will be further distilled with a help of a social survey that is being currently carried out.

George Gaskell, London School of Economics, continued describing project outcomes and made emphasize on distinction between restoration and enhancement. This has been a topic that resonated with the public and has policy implications.

One of the basic questions re NE were: “Is it safe” and “Does it work”. Issue of funding surfaced as well – big pharma is not particularly interested in funding NE research. Another finding emphasizes importance of values and societal balance with questions such as: will NE create more competitiveness, how it can affect social solidarity and cohesion. Education is seen by many not only as learning but character building and acquiring a moral compass and this should be taken into account in NE discussions as well.

Some experts believe that NE field should be regulated just like medical devices and drugs, as well as food claims.

He also reemphasized earlier point regarding children as there seemed to be a clear consensus on not involving children – this topic should be stringently oversighted by public authorities.

The discussion followed with the following points having been made: