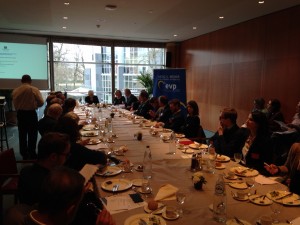 EBC was represented at the meeting by a Senior Public Affairs Manager Tadeusz Hawrot.

The meeting addressed the issues faced by carers providing care to people affected by mental health disorders and was particularly based on the results of EUFAMI’s recent ’Caring4carers’ survey on this topic. This survey, which has a strong focus on the experiences of carers for persons with severe mental illness, clearly demonstrates the areas where these need support. Background to the survey is the fact that recent reforms in mental health care are seeing a gradual move away from hospital-based to community care; therefore the demands on family carers has increased.

Over the past decades there has been some scientific survey-based research data documenting the carer burden. However, the research is limited, not recent and often based on single country examples. ‘Caring 4carers’ was specifically designed to address this evidence gap and assess the experiences of family carers in caring for a relative with severe mental illness, from an international perspective.