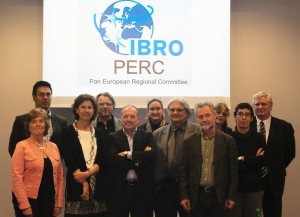 On 26th of November, the Board of EBC discussed and reviewed an application for membership received a few days earlier from the PanEuropean Regional Committee (PERC) of the International Brain Research Organization (IBRO).

Herewith, EBC is delighted to announce that PERC-IBRO has become a new member organization to EBC. In doing so, it will join forces and work together towards fostering the field of neuroscience in Europe.

IBRO is a global organization resulting from the union of neuroscience organizations with the aim to promote and support neuroscience training and collaborative research around the world.  In addition, IBRO has partnerships with like-minded federations of scientific societies to identify priorities and help bridge gaps in knowledge, investment and resources in the field of the brain and related diseases, from development to aging.

The PanEuropean Region encompasses 37 neuroscience societies and associations. As such, it has amongst its goals the promotion of neuroscience and brain research in all regions of Europe. In the last few years, IBRO-PERC has established collaborations with European organizations representing basic neuroscience in Europe such as FENS, to promote neuroscience in Europe at all levels, including the training of the next generation of European neuroscientists as well as stimulation of using scientific knowledge to develop and improve treatments of disease.