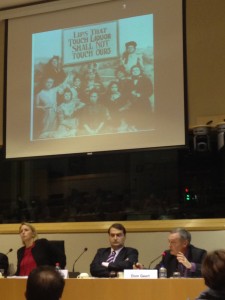 On 17th November, the European Brain Council –in collaboration with its partners- organized a Roundtable meeting at the European Parliament hosted by MEP Jytte Guteland to raise awareness of alcohol related harm. 2015 marks the 3rd year the existence of Awareness Week on Alcohol-Related Harm (AWARH), which was held between 16th-20th November 2015 in Brussels. This year’s theme was: The EU Alcohol Strategy: Act Now! – “Alcohol – Less is Better!”

The 2015 Awareness Week on Alcohol Related Harm aimed to galvanize EU and national policy makers into action to address alcohol related harm in Europe. The European region is by far the highest drinking region in the world, with social costs attributed to alcohol amounting to more than €155 billion annually, a majority of which lie outside the healthcare system.